The normal human eye can perceive wavelengths from approximately 380 (violet) to 750 (deep red) nanometers (nm) long, which we know as the visible light spectrum. A nm is equal to one billionth of a meter. The lower the nanometers, the higher the frequency or number of total light waves within any certain distance. So, frequency has nothing to do with the speed of light’s forward motion, as much as it has to do with the speed of light’s sideways motion. For all practical purposes, frequency is the same thing as the oscillation or vibration. It is the transverse wave, or the sideways motion of light.

What if you could see beyond the human visible light range? What would you see?

In low light settings, the human eye perceives with monochromatic (single color) receptors, or rod cells. In bright light, the human eye perceives with trichromatic (three color) receptors, or cone cells. There are animals that have way more advanced visual systems than humans do. Birds, lizards and fish have receptors that can perceive ultraviolet wavelengths of less than 380 nm, which is beyond the human visual range. Birds have both ultraviolet and complex multidimensional vision, allowing them to scan the ground while flying, navigate, and spot ultraviolet markings on other birds for mating. Some butterflies have six photoreceptors. The mantis shrimp has twelve different spectral receptors, being the most complex vision system known within the animal kingdom. Many animals only have dichromatic vision, or two receptors. Some snakes have infrared receptors, allowing them to see heat at the other end of the spectrum in wavelengths greater than 750 nm, also outside the human range.

If you can pull back from the forward motion of light, slow your brainwave speeds to theta or delta levels, increase your vibrational frequency, empty your mind, expand your peripheral vision and expand your feelings sideways, then you would be able to perceive outside the normal human visual range. You would see energy and other dimensions.

I believe that everything is energy, because I can see it with the naked eye. Solid. Non-solid. All energy, just different vibratory rates. The physical is not as physical as people believe, but your mind makes it solid. It’s composed of varying waves of light. When you expand your consciousness sideways and step into the gap between the waves, you perceive new worlds. Within those worlds are endless sentient life forms. The Beings are always there, it’s just that they vibrate at different frequencies than people are normally trained to see. With a little training, you can learn to see them.

Many of the Beings of those worlds appear in monochromatic colors—different shades of the same color. I believe it’s because they are composed of very narrow wavelengths of light, which would be very fast frequencies. Some of them expand very wide, as if they were oscillating faster than the speed of light.

The most complex Beings I’ve ever seen are the ones that I call the Circuitous Light Beings. They seem very sacred and exist in what seems to be a 26-dimensional world. There are three of them, Purple, Blue and Gold. I’ve created an image here to try to show what they look like. My illustration doesn’t really do them justice, as they are composed of continuous flowing light. Light with shape, almost like a flowing laser. They have a very intricate chestplate information board. The squares contain fast rotating images, videos, words and symbols, and it’s how they communicate, retrieve and download information. 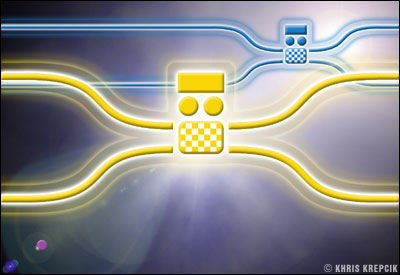 The first time I saw the Circuitous Light Beings was eyes wide open. I was looking out over a nature valley in Wales, England. The aluna dropped in, which looks like white mist, and there were a number of etheric window panes that stretched up into the air. In an area that was at 45º upper right from where I stood, Blue and Gold came in and were hovering. Behind them is what seemed to be a luminous city of light. Every now and then, Gold would move in very close, and it felt as if I was rotating into their world. It was beyond amazing and very humbling.