There’s nothing particularly wrong with conservation and environmentalism — until the moment that it becomes polluted with lies, disinformation, and misinformation. There are a lot of things out there that are being misconstrued and perverted into the propaganda of activism and sociopolitical agendas. It’s just more brainwashing and programming that keeps people in a perpetual state of illusion and ignorance.

The Suffering Polar Bear Trick is a perfect example of how The Power of Suggestion and The Power of Association are strategies being used in the brainwashing and influencing of society into accepting beliefs, ideas, and ideologies — uncritically and without question.

In 2017, National Geographic released a brief documentary video of a starving polar bear entitled, “Heart-Wrenching Video: Starving Polar Bear on Iceless Land”. The video is real footage of a starving polar bear — with a narrative blaming the entire situation on climate change and global warming. And the video went viral with over 2.5 billion views. 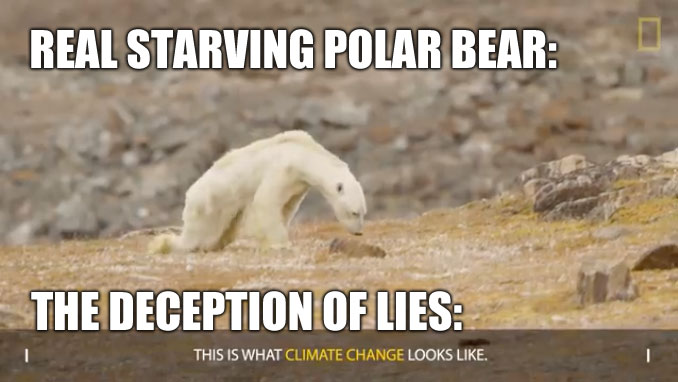 I’m Sorry — BUT THIS IS NOT WHAT CLIMATE CHANGE LOOKS LIKE.

This is what a Diseased, Old, or Wounded Polar Bear Looks Like.

It’s “Heart-Wrenching”, because it really is a starving polar bear. But there is absolutely nothing about it that proves that it was caused by climate change or global warming. And it certainly doesn’t prove that it has anything to do with human activity.

They also make it look sad, because it shows a starving bear finding food in a garbage can. But all bears rummage through garbage cans — regardless of whether or not they are starving. Bears are natural scavengers and will eat just about anything they find.

The video is real, but the narration is falsified emotional hype and opinion.

One year later, National Geographic and Cristina Mittermeier finally admitted that they didn’t tell people the full story about this video and that this video doesn’t necessarily have anything to do with climate change or global warming.

Cristina Mittermeier admitted “I can’t say that this bear was starving because of climate change“.

Paul Nicklen admitted, “This is what starvation looks like”.

National Geographic editors also released “there is no way to know for certain why this bear was on the verge of death”.

But it’s all too late. The video went viral three years ago, it’s still out there, and people are naive enough to believe that it’s true. Because the video says, “THIS IS WHAT CLIMATE CHANGE LOOKS LIKE” with a starving polar bear crawling across the screen and digging through garbage cans for food, with sad, slow piano notes and synthesizers playing in the background. And it’s all a lie that deceives people.

And National Geographic doesn’t really care, because it serves their cause.

Mittermeier also explained, “A fast-warming Arctic means that sea ice is disappearing for increasingly longer periods of time each year. That means many more bears will get stranded on land, where they can’t pursue the seals, walruses, and whales that are their prey and where they will slowly starve to death”.

But That Isn’t Entirely or Necessarily True Either. That’s Assumption and Conjecture.

I wouldn’t necessarily call that, “fast”. I would call that, “the end of the ice sheet remnants from the last glacial period of this Ice Age”.

Does she even know where Polar Bears come from and why they exist in the first place?

Polar Bears are basically Brown Bears that diverged from mainland populations 150,000 to 400,000 years ago and adapted and evolved to survive freezing marine environments. But Polar Bears have been breeding with Brown Bears ever since, and it produces Grizzly-Polar Bear hybrid offspring that have the ability to reproduce. That means Polar Bears, Brown Bears, Grizzly Bears, and Kodiak Bears are all the same species genetically. They are only considered separate species, because they have each evolved slightly different features to adapt to their separate environmental habitats.

It means the entire reason we have Polar Bears — is because of Climate Change.

Polar Bears prefer to give birth on the dry mainland — rather than on the ice.

Polar Bears are mainland mammals. They are only classified as marine mammals, because they spend so much time on sea ice and in the water, and they are marine-life predators.

Polar Bears are excellent swimmers and have been known to swim for days.

Polar Bears also have four legs and know how to walk.

So what does she mean by “stranded on land”?

“Where They Will Slowly Starve to Death” — ?

It’s true that a Polar Bear’s primary diet consists of seals, walruses, and whales — but they are also known to eat berries, birds, caribou, crab, dolphin, eggs, fish, muskox, reindeer, rodents, seaweed, snow geese, and even other polar bears. And they would probably eat National Geographic photojournalists Paul Nicklen and Cristina Mittermeier, if they were given the opportunity, because hungry polar bears will eat humans.

Contrary to Mittermeier’s hasty assumptions, Polar Bears have survived glacial (freezing), deglaciation (melting), and interglacial (warmer) periods of the Ice Age cycle for hundreds of thousands of years — regardless of human intervention or her opinion.

And I’m sorry, but Polar Bears are the largest living land carnivores. They can weigh up to 1,540 lbs (700 kg). And I’m quite certain that they will eat whatever they feel like eating.

And before anyone can say, “what about the numbers?” — the primary cause of declining populations is hunting and poaching. It has absolutely nothing to do with climate change or global warming. With environmental regulations, the overall numbers are stabilizing or even rising in some areas.

There’s nothing particularly wrong with conservation or environmentalism.

The point is that fake news, lies, disinformation, and misinformation are being used in the propaganda of socioeconomic and sociopolitical agendas. It’s just more brainwashing and programming. It’s about keeping people in a perpetual state of illusion and ignorance. It’s the indoctrination of an ideology to serve The System uncritically and without question.

It’s certainly not about the Suffering Polar Bears. That part’s the Trick.