Revenge of the Bulls

I first started seeing visions of the Vengeance of the Bulls in February of 2008, while visiting the Sacred Lake of Avalon in Ireland. The energy of that area always gives me a deep level of clarity. In my visions, massive white bulls appeared in vibrant, high definition color. They were charging at full speed across the aluna spirit world like a massive, majestic force. White stags joined in, running beside them. The whole scene was a vast, flowing world of blue and white fractals.

It was somehow communicated to me that all the bulls really want is to return to a natural state of purity. They just want to be left alone. They just want to be allowed to live. Their spiritual identity had become tainted by the abuse of humans, particularly by that of bullfighting. It’s a dark stain in their energy field.

So, a small group of us later visited the bullring in Madrid, Spain in October of 2008. We’re each very sensitive to subtle energies, but you don’t need heightened senses to smell the death in that place. It’s rancid. The stench of dead carcasses filled the air. I could taste the blood in my mouth. And you don’t need clairvoyant vision to see how the bloodlust of bullfighting is a sick perversion of an innocent animal’s natural beauty. It’s an affront to their celestial spirit. It’s a reflection of true human sickness.

Bullfighting is a vile and disgusting blood sport. It is a form of ritual killing that spans back into ancient times. Its followers today are nothing less than a modern blood cult. Their evil hearts are fueled by the torture, suffering, and death of something sacred—one of Gaia’s children. How something so inhumane and perverse has been allowed to continue in our day and age is a dark stain on humanity’s soul.

Matadors are looked up to as macho role models and sex symbols. Apparently in Spain, all you need is a pair of silly pants and a total lack of respect for life… and not only can you can get away with heinous crimes, you’re idolized for it. Any good psychologist will tell you that one of the early signs of psychosis is animal abuse. It’s a neurological disorder. In fact, charm, manipulation, intimidation, sex, and violence are all used by psychopaths to dominate and control their victims. Not so surprisingly, those are the very same characteristics that matadors are known and respected for. Don’t you find that a bit strange? There must be a shortage of good psychologists in Spain.

But no karmic debt ever goes unpaid.

In October and November of 2008, we started seeing visions of the matadors going down. The bulls started winning. The visions were very vivid, violent, and accurate. And sure enough, the bullfighting season of 2009 proved to be one of the bloodiest bullfighting seasons ever. Matadors at every level have been gored. Lancers on horseback have fallen. No one can figure out what’s going on. 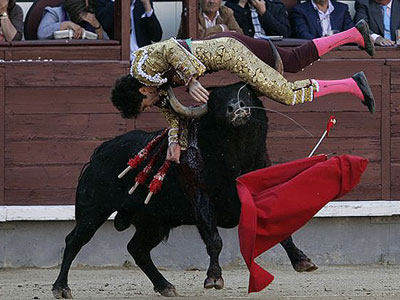 The Vengeance of the Bulls isn’t over. It’s just getting started. We’ve seen visions of matadors Ponce, El Fandi, Cayetano Riveria Ordonez, Francisco Ordonez, Morante de la Puebla, Juan Jose Padilla, Jose Tomas, and others, including the lancer Pablo de la Hermoza all go down. Eventually, they won’t get back up. Their bodies will break beneath horns and hooves. Their arenas will crumble to the ground at the hands of natural forces. Their fans will turn against them. Their economy will collapse. It’s all been laid out in the aluna. It’s natural. It’s part of their karma. It’s part of the renewal.

In November of 2009, we visited another bullring. This time, it was the one in Quito, Ecuador. It was just as vile as the one in Madrid. Again, we could sense the pain of the bulls that had been sacrificed there. Again, we could smell death in the air. And again, I could taste their blood in my mouth. I feel for them. The bulls are tired. They’re tired of dying for the sake of inhuman entertainment. They’ve had enough.