On an energy level, negative human sentiments are a black fractal haze. It swirls around people and blocks their ability to see. It’s not just the sentiments of the person it swirls around, it’s a projection of negative energy towards them from other people, society, and the not-so-invisible field of control. The black haze is the holographic fractal code and energy form of extreme negativity running through the Matrix.

When a person has extreme levels of negative inner sentiments, the black haze takes over their energy field. Control, domination, manipulation, hate, violence, disdain, disgust, sexual perversions…. many things. Any one of them can form a blackness within. That blackness eventually manifests in the physical body as a sickness or deformity. We’ve seen it many times.

When we do healing work, much of what we do is to remove the black haze and other disruptive energies from people’s etheric energy field. As the black haze is cleared out from surrounding them, they can begin to see, heal and grow spiritually at a rapid pace. But the black resonance is heavy in today’s world, and it can easily come back… so, we also do etheric protections to help keep a person safe. They keep the black resonance from being able to reenter a person’s energy field.

I’ve often mentioned the black resonance to people and what it looks like, but they can’t always see it. And some people are very skeptical and full of doubt about it, but interestingly enough, skepticism and doubt are both components within the black dust… so, it’s no surprise when they can’t see it. Those very sentiments are part of the black fog that blocks their vision. 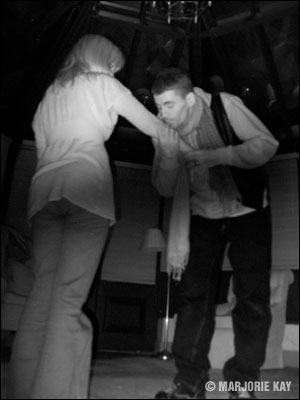 During recent healing work we were doing in Bath, England in April, 2009, I was blowing etheric protection energies into a woman’s fractal logo, when our photographer captured this image. She was shooting with an infrared camera and flash system. We can’t really explain the black dust in this image from a physical sense, because there was nothing in front of the flash to cause a shadow.

But this black mist across the photo is what the black resonance looks like. It’s like a black dust swirling around in the air. Every little piece of it is deadly, because it’s a holographic energy, and any little piece of the hologram contains the energy of the whole thing.

We’ve seen it many times in the line of work we do, so it’s nothing new really… but it’s quite amazing to have finally captured it on film and be able to show it to people.

If you’re interested in seeing how we work, you’ll have to catch us at one of our metaphysical workshops or schedule a remote healing with Khris Krepcik.