Last of His Tribe

Nobody knew his name. Nobody knew the name of his family or people. Nobody even knew how to speak his language. Living alone in the the Tanaru Indigenous Territory in Rondônia, Brazil for the past sixty years, he was known only as, Índio do Buraco — ‘Indian of the Hole’ or simply as the Man of the Hole. He was the Last of His Tribe.

When you think of genocide happening to indigenous people — you usually think of it as being something from the past. Generations ago. Not in this lifetime. Forgotten. History. But the strange reality and truth are that the intentional extermination of tribal natives is still happening to this day — it’s just that “civilized” people choose to ignore it.

Of course, the genocide of Native South Americans in Brazil has been happening since the arrival of Pedro Álvares Cabral and the Portuguese fleet in 1500 — leading to over 300 years of Portuguese colonization, until the The Brazilian War of Independence in 1822, then another 200 years of coups, dictatorships, and industrialization — but the last of the isolated tribes of the Amazon have been suffering massacres since the 1970’s from cattle ranchers, illegal miners, drug-traffickers, deforestation, and logging operations.

The Man of the Hole was found dead in his hut August 24, 2022. He was dressed up in ceremonial bird feathers, as if he were patiently waiting for death or practicing a spiritual ceremony. There was no sign of struggle, and they estimate that he was in his sixties.

The Man of the Hole had been monitored from a distance by the Brazilian Fundação Nacional do Índio (National Indian Foundation) aka FUNAI since 1996, because most of his people were wiped out by settlers during the 1970’s and then ultimately extinguished by illegal miners in 1995 — leaving him to be the last surviving member of his tribe. And he spent the last 27 years of his life alone in isolation.

He was known as Man of the Hole, because he built more than 50 huts over the years, each containing a strange 5 ft 11 inch (1.8 m) deep hole.

Nobody knows what the holes were for, but my guess is that they would be similar to the Native American Hopi and Zuni Sipapu — a hole that served as a doorway or portal that they believe the first people of the earth walked through to enter the physical earth plane — then dividing and separating to become the first tribes.

The Hopi and Zuni have shallow symbolic Sipapu in their spiritual Kivas to this day, so it’s not that hard to believe that the unknown South American tribe could have had very similar creation myths and spiritual practices.

The United Nations (UN) estimate that there are between 100 to 200 scattered indigenous tribes living in isolation from the modern world community with up to 10,000 individuals around the world. Most of these isolated tribes are living in the South American Amazon, primarily Brazil. The only knowledge of them comes from neighboring indigenous tribes or aerial footage. 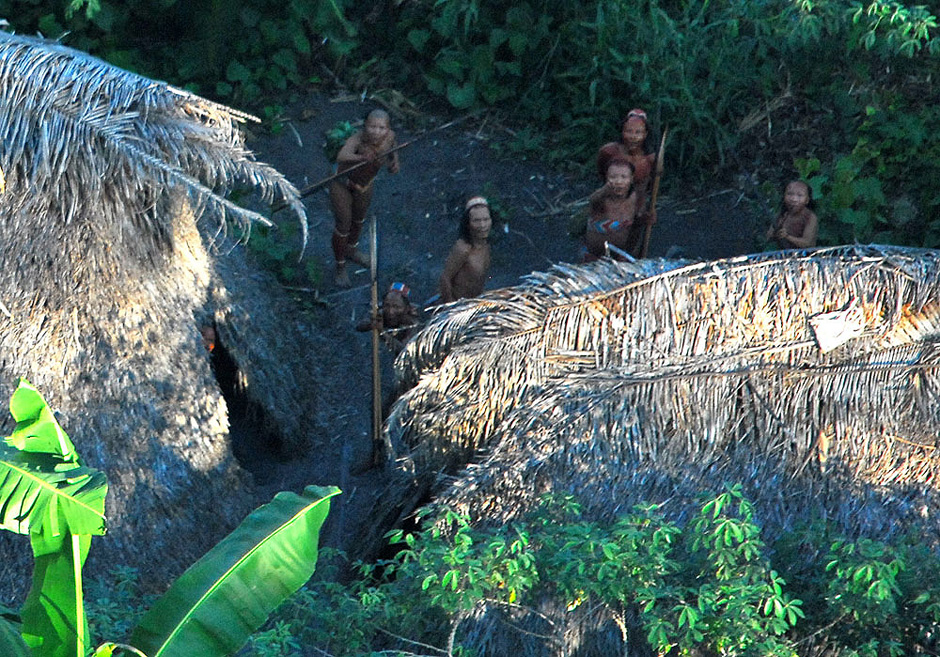 From their point of view, modern society is like an alien invasion from outer space.

And one might ask why don’t they want to assimilate into modern society?

In 1981, an isolated indigenous tribe in Colombia known as the Nukak were contacted by evangelical Christian missionaries called the New Tribes Mission. The Nukak were initially receptive to interaction and trade with the missionaries and settlers.

Then — hundreds of the Nukak, more than half of their tribe, died from outbreaks of malaria, measles, and pulmonary diseases (aka. the common flu). So, the Colombian government forcibly relocated the tribe to a nearby town “to help them” with food and government support, only to find themselves living in poverty.

If that’s not a perfect example of The Harm of The White Shadow, I don’t know what is.

The native indigenous tribes aren’t just being wiped out by cattle ranchers, illegal miners, deforestation, logging operations, settlers, narco-traffickers, gangs, and governments. They are being wiped out by White Shadow Christian Do-Gooders and Disease.

It’s the same as it’s always been. And most of it gets covered up.

There are only 10,000 of them left in the world. And eventually, they will all be gone.

Eradicated by The Sickness of Greed.

My point with this is that The Evolutionary Path of the Rigid Human Intellect moves further and further away from Nature and Spirit — and is willing to destroy all that is natural to do so. That’s The Sickness of Greed. And you would think that the extermination of innocent indigenous native tribes would be something of the past, but it is still happening to this day. This is just one example. There are many.